This was posted 2 years 9 months 22 days ago, and might be an out-dated deal.

If you aren't interested in Credo Courses deals you can simply hide that store from your deal feed. https://www.ozbargain.com.au/wiki/help:faq_beginner?#how_can...

Dr. Gary Habermas is Distinguished Research Professor of Apologetics and Philosophy at Liberty University. Dr. Habermas is the most respected scholar of the resurrection of Jesus in America and in this class he teaches you everything he’s learned.

Gary Habermas, the world’s leading expert on the resurrection of Christ, has created an entire course just for you!

There is no more important event in human history than the Resurrection of Christ. This event not only evidences God’s intervention and love into the human condition, it tells the world that Christ is Lord.

The great thing about the resurrection of Christ is that it is not something God asks believers to accept with blind faith. This is an event that happened in human history with hundreds of historic details that people are called to examine to gain confidence in their faith in Christ. 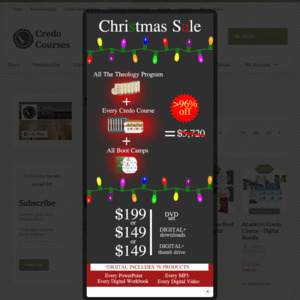