The Good Guys - 10% off Ticketed Prices 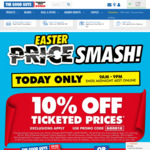 10% off ticketed prices today only at The Good Guys

Excludes selected advertised lines, cannot be used in conjunction with any other offers