This was posted 1 year 2 months 3 days ago, and might be an out-dated deal. 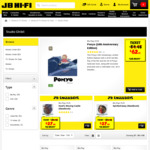 JB Hi-Fi has 30% off Studio Ghibli movies until May 15th or whilst stock lasts, as per a post on Facebook.

Studio Ghibli movies are rarely discounted apart from standard JB Hi-Fi 20% off promotions, and none of the movies are available to stream or even purchase digitally.

For those interested in checking one of their movies out, I would recommend Spirited Away.

My Neighbour Totoro
by Studio Ghibli