This was posted 2 years 6 months 2 days ago, and might be an out-dated deal. 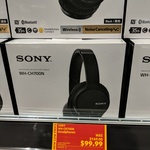 I had a search on my phone and couldn't find this deal, only the one in January for $149 which had heaps of upvotes. Was $149 but the cheapest elsewhere seems to be around $180.

Not sure if store specific but had a quick count and there was well over 100 units.

This was at the newly opened Coburg store in Vic.

UPDATE Staff said that other stores had them in the past but held on to them and passed them on for Coburg's Grand Opening.