This was posted 1 year 3 months 19 days ago, and might be an out-dated deal. 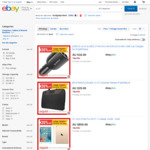 Free Postage on all of these.

It's by no means the best price this has been had for, but its close. And considering they are in run-out its a pretty good buy.