This was posted 1 year 7 months 21 days ago, and might be an out-dated deal.

After repeated requests Romoss finally have the 26800mAh power bank on sale and at a lower price than before. Also on sale is the same power bank in the capacity of 20000mAh and 3 other power banks.

The 26800mAh (SW30 Pro) and 20000mAh (SW20PS+) have multiple fast charging technologies including 18W USB-PD via USB-C, Quick Charge 3.0 via the blue USB port and 5V/2.1A via the white USB port. For recharging they have USB-PD via USB-C, QC 3.0 via Micro USB and and 5V/2.1A via Lightning. Other fast charging technologies supported include Huawei FCP, Samsung AFC (excl. S9/S10), QC2.0, MTK PE and Apple 2.4A. They both support pass-through charging.

The remaining 3 power banks are standard charging power banks (5V/2.1A) and do not feature the 18W fast charging found in the 2 above. Please See each individual listing to see the differences (battery level screen, dimensions, capacity etc) between each. 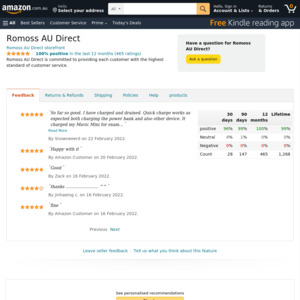