This was posted 1 year 7 months 12 days ago, and might be an out-dated deal. 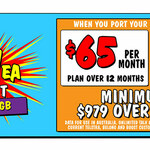 Seems to be a pretty good deal considering this is a new release phone with an outright cost of $749!