This was posted 10 months 11 days ago, and might be an out-dated deal.

A while ago I was selling Windows keys and MS Office on eBay, but I got too busy with work (and a little lazy) so I stopped. There's not a lot of money in it and a lot of competition!

Let me give you the info:

The problem is, 'OEM' (Original Equipment Manufacturer) keys are NEVER legit. The listings will say there were 'taken from PCs no longer in use' but it's all a lie. The keys are actually MSDN keys - or keys meant for the developers on a business/university fleet of computers.

To be honest, when I started selling MS software, I didn't realize this myself and would often sell OEM keys when I started (without knowing). Some of these keys can be activated 50 times and the same key is sold 40-50 times. After a year or so, they may stop working.

I don't sell OEM keys anymore. I've since built a relationship with many international Microsoft wholesalers who can provide genuine (retail) Windows 10 keys at cheaper prices. These keys are YOUR keys and can be activated 5 times (on five different PCs). The same ones you find at retail stores (Officeworks etc).

Since I'm moving to Sweden, a friend asked if he could take over the business - he works in IT and has worked hard to set up a website!

Depending on pricing/availability, we can sell the keys for $50-$100.

However, we're selling a small number today for $30 each (using code 'bargain'). In return, we ask that you share your feedback with us and the Ozbargain community. We're also wanting to iron out some bugs with the website and also using the low price as a marketing tool.

Keen to get your feedback in the comments! 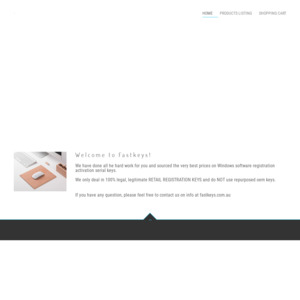