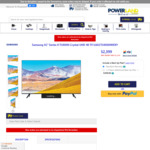 I've been keeping my eyes out for this TV for a while and this one has just dropped today. Best price for this 2020 version TV this year, I don't think Black Friday prices can get any better from the prices I've seen for the RU8000 (2019 model). I just bought it today and getting it delivered for free tomorrow. Next best price from Bing Lee and The Good Guys is $2795.