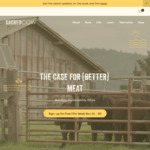 I've been following this project closely for almost a year now since reading the book and backing it on IndieGogo for $25USD. I think it's going to be great and it looks like it's going to be free from November 22nd-30th (US time).

The Case for Better Meat

At our grocery stores and dinner tables, even the most thoughtful consumers are overwhelmed by the number of considerations to weigh when choosing what to eat—especially when it comes to meat. Guided by the noble principle of least harm, many responsible citizens resolve the ethical, environmental and nutritional conundrum by quitting meat entirely. But can a healthy, resilient and conscientious food system exist without animals?

Sacred Cow probes the fundamental moral, environmental and nutritional quandaries we face in raising and eating animals. In this project, we focus our lens on the largest and perhaps most maligned of farmed animals, the cow.

The connection between nutrition and ecosystem health is starting to make some headway into mainstream media. Everyone is trying to figure out how to feed the world in the most sustainable and healthy way. However, we've allowed corporate interest, big food, flawed science, click-bait media and naïve celebrities to steer us away from what a truly nutrient-dense, ethical and sustainable, and regenerative food system really is. The mantra that “all meat is bad” influences how we're training dietitians, shaping our dietary guidelines, designing school lunch policies, and funding for nutrition-related research.

Sacred Cow comes at a critical point in the nutrition and sustainability story. A meat tax is a very real possibility. Well intended yet highly misguided, The EAT Lancet Global Dietary Guidelines are calling for less than 1/2 an ounce of red meat per day, for human and planetary health.

Meat is being vilified as causing cancer, heart disease and diabetes, yet there are no solid studies to back this up. Meanwhile, Silicon Valley has invested millions in highly processed meat alternatives, with the assumption that engineering our proteins in factories will be a better alternative to something nature has already figured out: grazing animals, restoring land while converting cellulose into protein.

THE SOLUTION IS REGENERATIVE AGRICULTURE.

The truth is, well-managed cattle are the unlikely heroes of this story. We can increase biodiversity, improve soil health, increase the water holding capacity of the land and raise high quality, nutrient-dense protein, while preserving family farming communities. Removing these animals from our food system could cause more harm than good. 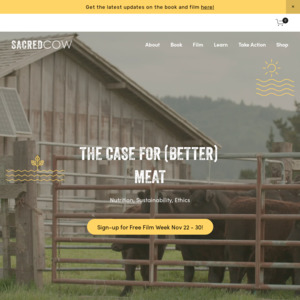