This was posted 10 months 25 days ago, and might be an out-dated deal. 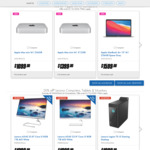 EDIT: JB are also doing a 10% off Mac deals. Have updated title to reflect.

Price beat at Officeworks to save a further 5% off
Alternatively, price match at JB or Harvey and use discounted gift cards.

Mod: It is unconfirmed either way whether this item will be included in tomorrow's sale, or will be an excluded item. This deal may not go ahead.