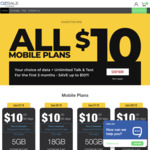 OzSale Mobile has extended the deal until 31 Jan 2021

From the previous deal you and can recharge the 2nd and 3rd months with $20 referral credit.

Have used it for a few days and data speeds seems good so far.

Additional facility that you can choose the date of activation and can delay upto 45 days or when the promo activation date (which ever comes first).
Offer ends 31st Jan. T&Cs apply*

*Promo T&Cs: Available to new customers only. Must order online by 11:59pm AEST 31 January 2021. Service must be activated prior to 28 February 2021. Price discount applies to first three renewals only. Payment failure or change of plan may result in loss of price discount. Ongoing price is the prevailing plan price after the three renewals. Not exchangeable or redeemable for cash. Not to be used in conjunction with any other promotion or offer. Promotion may be withdrawn or extended at OZSALE Mobile's discretion. Standard T&Cs and Fair Usage applies.

$20 Credit for referrer and referee 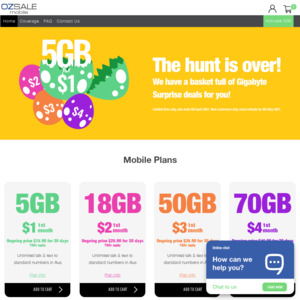