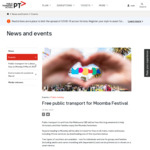 Free PT to/from the Melbourne CBD to encourage people to attend Moomba to liven up the city over the long weekend. Print out or show the PDF voucher on your phone instead of using your myki (do not touch on or off while using the voucher).