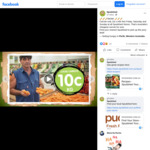 Carrot cake for the weekend!

Or dip and veggies?