This was posted 10 years 3 months 30 days ago, and might be an out-dated deal.

So for those of you who don't really care about comfort and want a cheap flight to Europe this is goodie!

Based on the comments below it looks like service for international flights is quite good!

Return flight to Amsterdam or Amsterdam 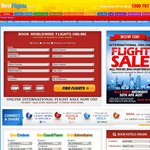