This was posted 3 months 12 days ago, and might be an out-dated deal.

Headspace 40% off Annual Subscription A$55.19 (New & Lapsed Accounts Only)

Usually A$91.99 for an annual subscription. Tried a bunch of codes and this was one of the only ones still working. For new/non-subscribed accounts only. Not sure when it expires. 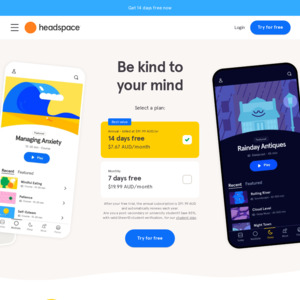