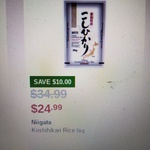 Received an email from Costco:

Valid in WA, QLD and SA only