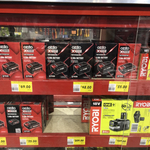 Went to Bunnings to grab some 4ah Ozito batteries which are $69 on their website. Found out that they were doing the special again on these and are $48 in store. Cant see them on their website.

Link to previous deal for all the info and comments (as the packaging on these are different to ones they sell for $69). OzBargain