This was posted 5 years 5 months 30 days ago, and might be an out-dated deal. 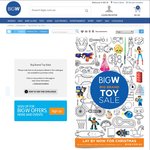 Latest Big W catalogue offers some good deal IMO.
Guys who are interested in this sale might hold for a while till the sale begins (16/6)

Fallout 4
by Bethesda
reviews
PlayStation 4
by Sony
PlayStation VR
by Sony
Uncharted 4: A Thief's End
by Sony Interactive Entertainment
Xbox One
by Microsoft