This was posted 3 years 2 months 22 days ago, and might be an out-dated deal. 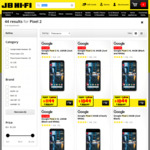 $350 off RRP on the XL variants of the Pixel 2. Some colour/storage variants only available for delivery (JB delivery fees are very reasonable).