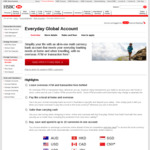 First time i get to submit something, quite exhilarating. I think this goes under the deals / bargains part considering what i have seen before but i could be wrong, not sure if this should be in the forums instead? Its always available and free i believe.

A friend of mine works at HSBC and told me about this new account from HSBC which has a lot of benefits for people who in the past used to use 28 Degrees or other cards to withdraw foreign currencies when they went travelling as well as purchasing in foreign currencies. He knows i travel a lot and used to use 28 degrees for this till they changed the ability to withdraw cash out without penalties overseas.

Its called Everyday Global Account. Sounds pretty promising as it has some features that i havent seen before. I tend to hold onto a lot of my foreign currencies once i come back from a holiday. With this card, i believe i can deposit the foreign currency into my account and dont have to hold onto the notes etc and then withdraw it again without fees when i go back to that country…