This was posted 3 years 7 months 12 days ago, and might be an out-dated deal.

FREE: Send Your Name to the Sun on the Parker Solar Probe @ NASA 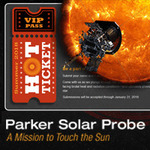 “Be a part of the first mission to touch the Sun! Submit your name and it will be included in a memory card that will fly aboard Parker Solar Probe spacecraft. Come with us as we plunge through the Sun's atmosphere, closer to the surface than any spacecraft before it, facing brutal heat and radiation conditions—and ultimately providing humanity with the first-ever close-up view of a star. Submissions will be accepted through April 27, 2018.” Enjoy :)