This was posted 1 year 6 months 26 days ago, and might be an out-dated deal. 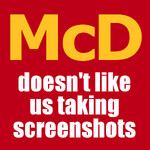 The 3rd Quarterly Loose Change Menu update has been revealed and it seems to me that it presents quite a decent offering!