This was posted 2 years 1 month 18 days ago, and might be an out-dated deal. 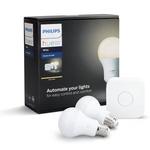 ===
Until Sunday get yourself 80% off^ the current ticketed price of a Philips Hue E27 Starter Kit A60 White. Simply present the Exclusive coupon below at any JB Hi-Fi store in Australia or buy online by visiting jbhifi.com.au, adding the product to your shopping cart & entering the Exclusive Coupon code in the space provided at checkout.