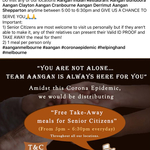 An incredible gesture by this restaurant chain to help the most vulnerable at this crazy time. Enjoy :)

We may not do too many great things, but we can positively contribute by doing such small deeds with great love for our countrymen. Do visit any of our locations in Bundoora, Clayton, Cranbourne, Derrimut, and Shepparton any time between 5:00pm to 6:30pm and give us a chance to serve you.

Important: Senior Citizens are most welcome to visit us personally but if they aren't able to make it, any of their relatives can present their valid ID proof and take away the meal for them. One meal per person only.