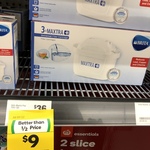 First post, saw this at morning. Cheapest price I have ever seen ,$9 for 3 pack filter. Checked online stores close to me only Revesby is on special.