This was posted 1 year 1 month 26 days ago, and might be an out-dated deal. 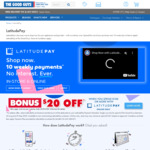 Update 2: According to The Good Guys, LatitudePay is having massive problems with verifications due to fraud etc. Thus orders are not showing up in The Good Guys' system for days, and they have to manually push them through. This is the source of the delay of the order acknowledgement email. (See anthonybs's two comments below.)

Update 1: According to LatitudePay, when paying via their service order fulfilment by The Good Guys takes one to three days. You cannot Click & Collect within 2 hours—nor even within the same day—even though the TGG website implies otherwise! (See petestrash's comment below.)

Single use only. No interest or fees*. Not available if paying with Store Credit or gift cards.

How to get the bonus:

(The Good Guys get the full amount, the $20 is taken off your LatitudePay total, and 10% of the balance is charged to your credit card for the first instalment.)

LatitudePay is the easy way to shop now for your appliances and pay later – with no interest, ever, and no fees if you pay on time. Spread the cost of your purchase over 10 weeks plus its free to apply (in-store or online via our shopping cart)! Terms & Conditions2 apply.

If you’re new to LatitudePay, you’ll need this stuff:

How does LatitudePay work?

LatitudePay takes the first instalment when you commit to a purchase, with the remaining balance being processed weekly, that means you pay 10% upfront and the rest of the purchase is paid in 9 weekly automatic payments. Applying is simple – and free!

What can I buy on LatitudePay?

You can use LatitudePay in all The Good Guys stores and online to make a purchase of a product between a minimum $20 and maximum of $1,000. Some exclusions apply, such as agency brands (including Miele, ASKO, Portofino etc.), Gift cards and ePay purchases. Look for the LatitudePay logo on the product page to see if the product is eligible.

* Are there any fees?

The only time LatitudePay ever charges fees is if the weekly payments decline, in which case a $10 late fee applies. They will call, text, or email you to arrange an alternative method of payment. 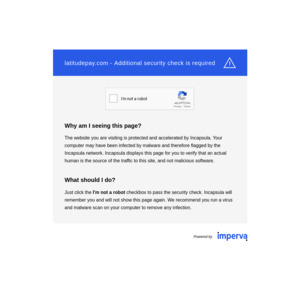