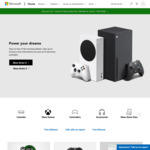 Microsoft Australia has a 1.5% Cashback when you use Cash Rewards.
Checking the T&C's this includes XBOX Consoles.

1.5% Cashback via Cashrewards. Mod note: Users report that there may be no cashback, check with your cashback provider first.

Mod: Removed cashback from title again. Title guidelines.. "Standard cashback rates. Cashback rates should not be mentioned in the title unless it is a special rate or new cashback offer."