This was posted 1 year 7 months 29 days ago, and might be an out-dated deal. 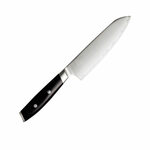 Ok - first up the negatives - at the end of the day, this is just a knife. It can't give you a backrub, it can't complete a spreadsheet, and it is a very poor and sometimes dangerous substitute for a consenting lover.

But the positives more than make up for it. Retailing for $150, but more commonly available around the $120 mark, the Yaxell Mon Santoku has slashed its price to have a fair stab at better known brands. For the uninitiated, the "Santoku" - literally meaning three virtues; chopping, dicing, mincing - is a mid to large sized multi-use knife frequently interchanged with the more common Chef's knife of the western world. Slightly smaller at around 7" compared to the 8-10" blade of a traditional Gyuto or Chef's knife - like myself, what the Santoku lacks in length, it makes up for in dexterity. As a result, many chefs - most commonly females, those of Eastern background or with smaller hands, choose the Santoku knife as the main work horse of their kitchen.

Yaxell are an OEM manufacturer and frequently feature on the website of knife enthusiast, Burrfection. His tour of their Seki factory is an amazing insight into Japanese craftsmanship and details some of the reasons why forged Japanese blades often command such a premium. If you tire of manga, karate practice or late night J-league action, sink your teeth into his fascinating video at www.youtube.com/watch?v=nqKoAaMxy3U&list=LLS7YPmJHFQytVi0dhL...

They don't have the profile of the likes of Global, but those in the know will tell you that Yaxell are literally a cut above, largely on account of their VG10 blade with its Rockwell hardness rating of 61, compared to the softer metal of Global's 56-58 rated knives. Like Globals and most Japanese knives, they are susceptible to rust and chipping on account of their sharper, harder blades - so make sure your wife or knife maid doesn't toss them in dishwasher.

The Mon is Yaxell's entry range, but don't let that put you off. Whilst you won't get the cosmetic benefits of Damascus layering or a hammered finish and scalloped indentations, what you will get is rock-bottom pricing for a 61 rated blade that is built to be used, not just to be looked at. This "Sonny" functions exactly the same as their prettier looking "Cher" Zen Santoku which will require significant upkeep to keep its shape only to inevitably see its pretty looks fade over time. By comparison, the Zen is currently "on sale" (like every other knife in existence!) at $170 according to www.kitchenwarehouse.com.au/Yaxell-Zen-Santoku-Knife-16-5cm

For anyone looking to save a few extra dollars, coupon "NAKED15" should save you $15 if you are looking to add something else to your basket to get over the $100 free shipping threshold. Contrary to the '$15 off any $75 purchase' spiel, it didn't work for me just on the Santoku, but did after I added a very handy Minosharp to my basket, which sharpen up Shun or Yaxell knives nicely without needing the level of mastery and patience expected of a whetstone.

Just be warned - these things are next level sharp out of the box. I dropped one of my Santoku's on my foot and almost lost a toe! Thankfully, the doctor was able to save it with a dozen stitches and by replacing part of my lost nail with some hard candy of all things.

Thanks to this knife, I now have a tic tac toe…

Edit # 1 - Use code FREESHIPKNIVES or CART10 for free shipping if spending under $100. With thanks to morpheous for the sharp tip!
Edit # 2 - Showing as out of stock online, but commenters have reported being able to place orders over the phone via their nearest store.
Edit # 3 - 21/10 For anyone returning to the scene of the crime, Yaxell are having up to 59% off full knife block sets to compliment your new toys, as seen at www.ozbargain.com.au/node/575201
Edit # 4 - 27/10 Back in stock online and in many stores