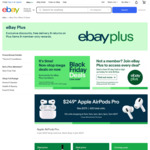 More ebay sales have been announced.