This was posted 8 months 4 days ago, and might be an out-dated deal. 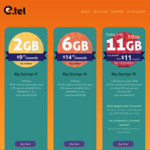 After being on the $18p/m Circles.Life plan that was discounted from $28p/m to $18p/m for only 12 months, prior to the end of the plan term, I went on the hunt for a better deal after Circles.Life advised they couldn't extend the discount and could only offer more data for 3 months as an incentive (I later received an email though saying they were extending the $18p/m plan offer though).

To further save on my monthly bill, I had a look at my monthly data usage and discovered that since I've been mainly working from home, I don't need anywhere near 20gb of data a month and with a bit of luck, I managed to find a hidden Etel promo page offering an $11 plan with 11GB data, unlimited calls and SMS. One catch with this plan is that MMS IS NOT included and comes at a cost of $0.75 per MMS but if I'm comprehending the CIS correctly, you receive $19.95 in credit per month to use on MMS and international calls which is a nice bonus.

There's no contract and the discount is guaranteed for 12 months.

Ensure you sign up via the linked page as this offer isn't advertised on their main site. I'll also provide a heads up that porting is very, very slow currently for Etel - I'm told they're migrating to a new system and had to do all port requests manually. On the upside, I called them three times to follow up when the porting request would be completed and managed to get through each time very quickly. 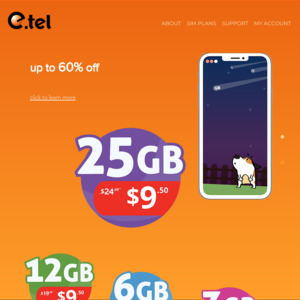