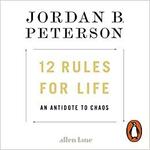 Update: (I have received mine and can confirm that it is…)

Read by the author Jordan Peterson
Unabridged
15.5 hours on 13 CDs
CDs are audio CDs for a CD player (or other device, computer etc with right codecs)
Has dropped another dollar in price to $4 AUD

When I was checking out this deal https://www.ozbargain.com.au/node/599722
for the paperback I spotted the CD audiobook also on sale.

$5 for a cd audiobook is pretty rare, they are so overpriced (which is really unfair for the print disabled).

At this price it is even cheaper than an audible credit.

Now details are sketchy. This happens often with audiobook listings. Ive tried my best to assertain the details:

It is supposed to be an audio CD.
(but at this price it is possible that is a mistake and it is an MP3 CD. if it is it might not work on your old cd player and you might need to make cds from it using your computer first.) (edit: i forgot to say, you can also using a computer listen to MP3 CDs, and/or copy the MP3 file/s onto something that can play MP3s like an ipod or phone. basically you might need a computer with a cd drive.)

It is supposed to be unabridged.

And I think it is supposed to be read by the author.

I think it is the audible and Allen lane/penguin version on cd: https://www.audible.com.au/pd/12-Rules-for-Life-Audiobook/B0...

No promises though sorry.

I still haven't read this so I don't know if it is fantastic or terrible but it seems to be polarising.

I do know the man is a horrific waffler so it could be boring. But in that case I will use it to fall asleep to.

So you can argue all you want in the comments, if it gets crazy I'll just turn off my notifications.