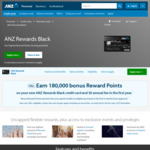 Was browsing Point Hacks and saw this gem of a deal
$800 in gift cards (or $700 cashback) for $2000 spend is one of the best value returns out there
Pity i already used my ANZ Rewards card for this 12 month cycle.
FYI This is different to the ANZ Qantas Frequent Flyer scheme and not affected if you already have an ANZ Frequent Flyer card

If you haven't, apply away!.

Key Attributes
180,000 ANZ Reward Points (can get an $800 gift card) + $0 first year annual fee, when you spend a minimum of $2,000 on eligible purchase within the first 3 months of approval
24/7 Personal Concierge and exclusive entertainment and lifestyle offers
Complimentary travel and shopping insurances (PDS)
Earn 2 ANZ Reward Points per $1 spent on eligible purchases up to $5,000 per statement period, then 1 Reward Point per $1 spent on eligible purchases above $5,000 per statement period
Annual Fee: $0 for the first year, $375 p.a. ongoing
New card. T&Cs, eligibility criteria, fees & charges apply (including annual fee, currently $0 for first year, $375 thereafter).
Not available where you currently hold, or have closed, an ANZ Rewards credit card within the previous 12 months. 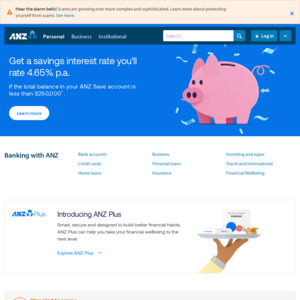