This was posted 7 months 22 days ago, and might be an out-dated deal. 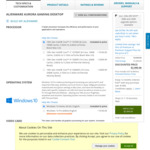 After watching various Alienware Aurora R11 deals with the RTX 3080 on OzBargain lately (refer here), I noted that you could upgrade one of the current configuration deals to include an RTX 3080 and it worked out slightly cheaper than the recent $3254 deal but with only 1TB of HDD (rather than 2TB). For those who don't care about unlocked CPUs, it's about $93 cheaper with the 10700F in this deal. The smaller 3.5" drive is less likely to be an issue if you were planning to either install your own much larger shucked drive, or if you were planning to mod the case with an extra intake fan by removing the 3.5" drive from the front bay.

For comparison purposes, I've also added in the other recent deal which includes a truckload of accessories and is also still active (and IMO a great deal if you want the matching Alienware branded monitor/keyboard/mouse/headset).

I've done my best to try and include the correct links with the configurations but in case they don't work, the Dell code is awrad063au or visit the original build link and then add in the RTX 3080, and change the CPU to KF if you wanted that. Upon check out, add the LOVEKEANU coupon code and you should get the prices per above.

Don't forget 6% Cashrewards (which others have commented will stack with this code), and there's also Dell reward points too if you care for them.

Update 23/04/2021
Configurations from Dell have changed and whilst LOVEKEANU is still valid, the previous deal with the KF and 2TB HDD is active again: https://www.ozbargain.com.au/node/616191