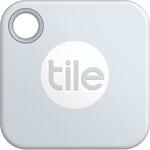 Offer valid for instore & online transactions until 11:59PM AEST 5th May 2021, offer cannot be extended. Coupon cannot be used in conjunction with any other coupon offer. Coupon valid for a Tile Mate Bluetooth Tracker (2020) (413903). Offer while stocks last. Excludes delivery charges. 50% off^ will be calculated from the current ticket price. Offer can be redeemed instore or online by visiting www.jbhifi.com.au, adding the specified product to your shopping cart and entering the coupon code number in the box provided at checkout.