G’Day OzBargain, I wanted to thank the community again for all your support with our previous promo deal. A few of you were asking about the headband variation last time and we’re happy to say that AMD have given the okay to supply to retail customers, which means we can too.

This might be our last promo for a while so we’re extending it into the second week of November rather than ending it at the end of the month. We’re thrilled that NSW case numbers are much lower than last month but we’re still not out of the woods yet. Our hearts go out to our friends in Victoria, that are now the most locked down region in the world and we’re really hoping those case numbers stay under 2000.

As we’re opening up here in NSW, with kids going back to school and the rest of us slowly heading back in to the office (goodbye PJs til 3pm) we want everyone to stay as safe as they can be with the NANO-TECH nanofiber filters that provide 99.66% PFE and 99.92% BFE. It keeps you safe for up to 24 hours and is extremely comfortable and breathable.

The guy that desperately wants to go back to the pub. 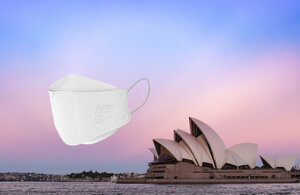