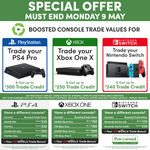 EB Games are having a trade credit increase on consoles until Monday 9th May. Advert says "get up to" meaning console must be complete and fully working with a controller, power cord and HDMI cable to get full amount.

EB World level trade bonuses are eligible for this promo. See full list of prices below.