This was posted 7 years 5 months 19 days ago, and might be an out-dated deal. 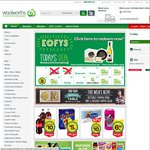 Apply both codes to receive the full $20 off your order

Edit: Everyday Rewards Card number may be required for both codes to work.
Edit 2: Or call the customer service when you get an error message and ask them to manually apply the $20 credit to your order.
Edit 3: $20 disc still works on mobile devices
Edit 4: Some orders are getting cancelled.

Note: Free Delivery (any day) only applies to the first 3 Orders per account