This was posted 4 years 11 months 4 days ago, and might be an out-dated deal. 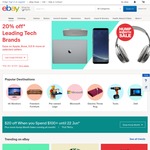 Click the related tab above to see all CHAOS deals

Use Cashrewards for an additional 1.3% cashback on everything at eBay