This was posted 3 years 9 months 21 days ago, and might be an out-dated deal. 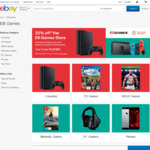 Looks like a great deal to me on consoles!

Get these first if you want a switch.

Remember that if you purchase, you should be able to email them or message on eBay to get them to apply the carrots you make on your purchase.

Xbox One X
by Microsoft
Nintendo Switch
by Nintendo