This was posted 1 year 1 month 15 days ago, and might be an out-dated deal. 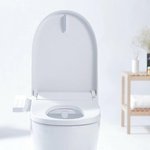 Recent low price on this popular Xiaomi Toilet Seat and a cheaper alternative to Xiaomi Whale Spout smart toilet seat that gets posted. Once you go bidet you never want to go back!

It ships from Banggood's AU warehouse and you can possibly stack the coupon with cashback for a better price.

AU$ based on current Mastercard rate.