Free 3 Month Subscription To The Sizzle For COVID-19 Vaccinated 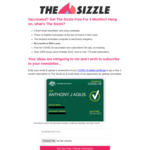 I'm giving away free 3 month subscriptions to my tech newsletter, The Sizzle, for anyone who uploads proof of their COVID-19 vaccination. Normally 3 months costs $15, but as an incentive/reward for those being proactive and getting vaccinated against COVID-19, it's free - no strings attached, no payment information needed, single-click unsubscribe at any time.

Plenty of Ozbargainers are subscribers (they may even comment on this post!), but what is The Sizzle???

This offer will continue until 80% of Australians are vaccinated! Feel free to shout out in the comments if you have any questions. 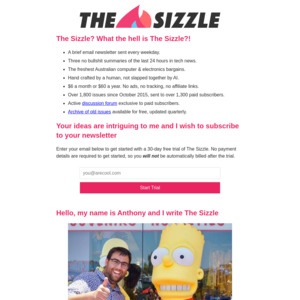