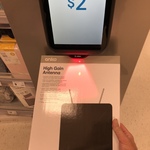 Heaps of stock in Kmart Watergardens

There are 2 different boxes for the antenna. This one is the bigger box.