Switch your internet to MATE in May and enter the promo code MAY100 on signup to get $100 credit on your account once connected!

Applicable for any MATE nbn plan:

All internet plans include unlimited data, no lock-in contracts and award-winning Aussie support.

You can also save $10/month ongoing on the above prices if you bundle one of our postpaid mobile plans. All mobile plans use the Telstra Wholesale Network. See a coverage map.

Plus, this $100 credit offer is also available when you bundle nbn with our exclusive $40 for 80GB mobile plan as well. 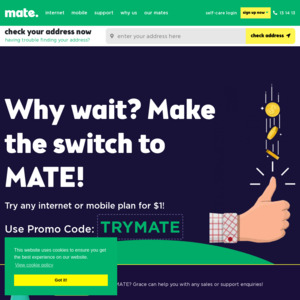