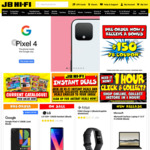 Salesperson at my local JB showed me this today, I believe I have all the correct details

Can be an existing customer, just has to be a new service

Update 24 Oct 9:40am: Judging by this comment, the deal was changed around 8am this morning to require the purchase of a device. Deal expiry set to 8am.