This was posted 1 year 2 months 29 days ago, and might be an out-dated deal. 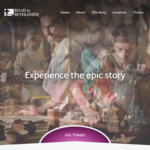 Bring your family, friends and colleagues to experience an outdoor walk-through theatrical presentation that brings to life the true story and meaning of Christmas. The evening begins in our waiting area, where you'll find all kinds of food, children's activities and music to keep you entertained. As you take part in this outdoor-promenade theatrical adventure with your group, you'll be stopping at several drama presentations.
Some 15,000 travellers each year are led around the Christmas story by character guides (in groups) - making ROAD to BETHLEHEM one of Australia's biggest free Christmas events. You’ll encounter all manner of characters along the journey, from the jealous royalty, down to humble shepherds, to majestic angels, to bantering Roman soldiers.

This a great free Christmas event. I've only been to the Melbourne one and it gets packed every year. Obviously, it is a Christian story of Christmas with angels and what not. However, Christianity is not pushed on people who attend - so if you're like me and don't like that kind of thing being pushed on you, it's not a problem. Highly recommended for children as there is face painting, food and other entertainment. Plenty to enjoy for adults too. Attendees usually get a free showbag which in the past has had food and toys.