This was posted 4 months 24 days ago, and might be an out-dated deal. 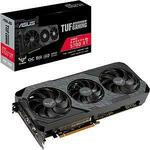 This seems to be the cheapest currently at $599, even cheaper than the previous Computer Alliance deal with Afterpay earlier this month.

Not sure exactly how it compares, but is also cheaper than Amazon AU's $605.52 for the Gigabyte RX 5700XT Gaming OC (slightly more expensive if including shipping).

EDIT: Note this is the revised model with improved thermals. Easiest way to identify it is by the fan sizes (85mm, 75mm, 85mm). Previous HOT model was 75mm x 3