This was posted 4 months 20 days ago, and might be an out-dated deal. 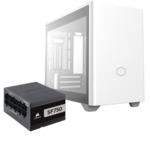 I think this is a pretty sweet deal, the PSU itself has gone for $240 on OzBargain before. This is the tempered glass model, comes with a riser cable, Reddit says its only PCIE 3.0 but I'm happy to be proved wrong…

Delivery Estimates based on cost to Brisbane and Chilla Well in the Northern Territory
Brisbane $28, Chilla Well $71

You can also get the regular version with no glass and no riser cable for $269
(initially I thought, "ewww, who wants one with no tempered glass", but you won't get a 240/280mm AIO cooler otherwise unless you spring for some 15mm slim fans, and even then, will be a tight fit…)