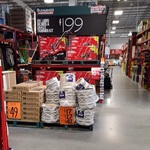 On sale is this promotional Ozito kit that includes a PXC 2x18V Lawnmower, 18V Grass Trimmer, 10 trimmer blades, 2 18V 2.5Ah Li-Ion Batteries and 2 Compact Fast Chargers for $199. It currently doesn't appear on the website, however you can check out the Ozito product page here since my photo is from a distance and a bit blurry.

Bunnings previously had this deal going last year and you can check out the comments from the previous deal. Comments said that the lawnmower is brushed and suitable for small / medium sized lawns. 4.0Ah batteries will also make the mower perform better.

To make finding stock easier I've included all the stores with stock for the I/N 0203462. Just be aware that it's not 100% accurate and stores with 1 or 2 instock may only have display models or none at all.