This was posted 4 years 2 months 20 days ago, and might be an out-dated deal. 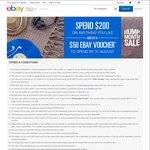 Deal extended from 29 June to 30 June

Here is the full T&Cs: